Marty and Boo started with an original take on the Alice in Wonderland story and turned it into cards with a focus on sketch cards.  Look for the followup set Nevermore Alice Flux later this year along with other sets in the works like Angels and Demons.
They have provided us with 2 promos this show!  An exclusive promo for the 2013 Island Dreams Charity Set and a promo for Nevermore Alice 2.

Largo Intergalactic ViE has provided us with several promo cards for their upcoming The E-Mail trading cards.  Some of these cards are VERY limited, so each promo packet will have 2-3 promo cards from the set of 5.  In addition, it is possible that we may run out of these, so come early each day for the best chance.

Leaders in the sketch card field, 5FINITY produces licensed sets with just sketch cards.  No base sets here.  5FINITY has created a special promo just for the Chicago show.... Pictures of exactly what it is will be posted when the cards arrive! 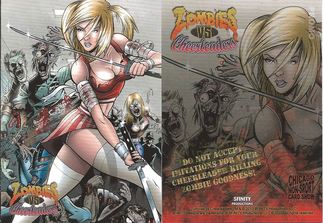 Rittenhouse Archives is known as a leader in the non-sport card world.  They have licenses for established franchises like Star Trek, James Bond, and Marvel Comics.  Plus they have ventured into new licences like Falling Skies, Game of Thrones, and True Blood recently.


We are pleased to announce that Rittenhouse has supplied us with an exclusive P4 promo for Season 2 of Game of Thrones! 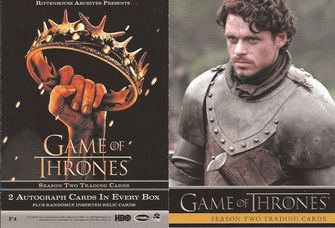 We Will have promo cards with art by guests Dan Gorman and Charles Simpson!

While not participating this show, these manufactures has supported the show in the past and we thank them for that.

Versicolor Productions started out as a printing company printing just about everything, including custom cards and sketch cards.  In 2011 they released the Betty Page Private Collection Box 1 to rave reviews.  Look for Box 2 late in 2012!